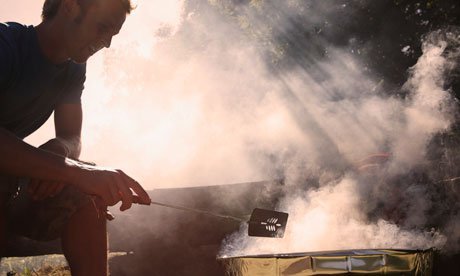 Barbecues that remove CO2 from the air could play a role in the fight against climate change according to Durwood Zaelke, a leading expert on rapid responses to global warming.

This year’s outdoor cooking season might be over, but Zaelke suggested at last week’s 10:10 talk that from next summer consumers should start demanding barbecues that do their bit for the planet by generating rather than consuming charcoal – or biochar.

Zaelke’s idea is based on a stove designed for use in the developing world by Rob Flanagan. The stove creates heat by turning wood or other biomass into charcoal, a process that releases combustible gases.

Once the cooking is over, most of the carbon from the fuel remains in the stove in the form of charcoal. This can then be mixed in with soil, a process that sequesters the carbon for thousands of years and boosts crop productivity.

Zaelke – an eloquent and immediately likable American with a background in international environmental law – wants to see the same concept applied to domestic barbecues. Done on a wide scale, he claims, this could help people “of all political persuasions” to painlessly do their bit to tackle climate change, at the same time as adding to the productivity of their gardens.

Of course, Zaelke isn’t pinning all his hopes for a rapid response to global warming on backyard cooking. As president of the Institute for Governance and Sustainable Development, he spends most of his time thinking about the various ways in which humanity might be able to “buy some time” in the fight against climate change by quickly reducing all those fast-acting warming agents that don’t persist in the atmosphere as long as CO2 does. These include black carbon (soot), methane,tropospheric ozone and hydrofluorocarbons (HFCs).

HFCs, which are synthetic gases produced largely for refrigeration purposes, are a particular area of interest for Zaelke at the moment. He and others are working hard to get these extremely powerful greenhouse gases incorporated into the Montreal protocol. Originally negotiated in the 1980s to tackle the ozone hole (which it has done very successfully), the Montreal protocol could now be a crucial weapon in the fight against climate change, according to Zaelke, who describes it as “the best climate treaty we have”.

Zaelke is cautiously optimistic that HFCs will successfully be brought into the Montreal protocol’s remit within a couple of years, and that this will represent a huge win for climate protection.

The talk – one of a regular series of climate-change seminars hosted by 10:10 – was highly persuasive. However, one audience member, a research climate scientist from Oxford University, was sceptical about the notion that quickly reducing emissions of fast-acting warming agents would help delay climate tipping points. His argument – debated at length after the talk by the geekier among us – was that because of time-lags in the climate system and the fact that the atmosphere responds to cumulative rather than current CO2 emissions, it wouldn’t make any difference when all the fast-acting warming agents are phased out, as long as it happens a decade or two before global CO2 emissions are reduced to zero.

This counterintuitive point was interesting to discuss, but everyone agreed that even if the argument is correct, the world still has a duty to quickly reduce levels of HFCs, soot, methane and tropospheric ozone in order to minimise the effects of global warming on the most exposed communities over the next few decades.

But whatever we do with non-CO2 gases, Zaelke says, we also urgently need not just to reduce carbon dioxide, but to get to a point as soon as possible where the world becomes carbon negative, with humans sequestering more CO2 than we release. “That might sound crazy,” he says, “but we could do it”.

The biochar barbecue idea is, I guess, really just a way for Zaelke to remind us that there are various techniques – on big and small scales – that we could use to suck CO2 out of the air. But Zaelke also has an ulterior motive. Backyard carbon sequestration, he says with a smile, “would help make sure my environmental friends don’t criticise me when I’m grilling my steak”.

Share and Enjoy:
This entry was posted in Food and tagged Barbecues, climate change, global warming. Bookmark the permalink.