Solar pannel from plants. Is it possible? 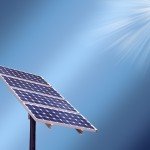 In a mashup of biology and electronics, researchers said they’ve made progress in making low-cost solar cell from plants.

A paper published in Scientific Reports today describes an improved method for making electricity-producing “biophotovoltaics” without the sophisticated laboratory equipment previously needed. Researchers said custom-designed chemicals could be mixed with green plants, even grass clippings, to create a photovoltaic material by harnessing photosynthesis.

“Take that bag (of chemicals), mix it with anything green and paint it on the roof,” said MIT researcher Andreas Mershin, who is one of the paper’s co-authors, in a statement. He imagines that this sort of cheap solar cell could be used by people in developing countries who don’t have the power grid to charge lamps or cell phones.

The advance represents a 10,000 percent efficiency improvement on previous plant-based solar cells, but these cells are far from being practical. Experimental solar cells made using this process only convert 0.1 percent of sunlight to electricity, which would need to improve tenfold to be practical, Mershin said.

Scientists for years have sought to make solar cells from the set of molecules within plant cells that do the work of photosynthesis, called photosystem-I. However, this material required specialized thin-film deposition and optical equipment. And the current produced was too low.