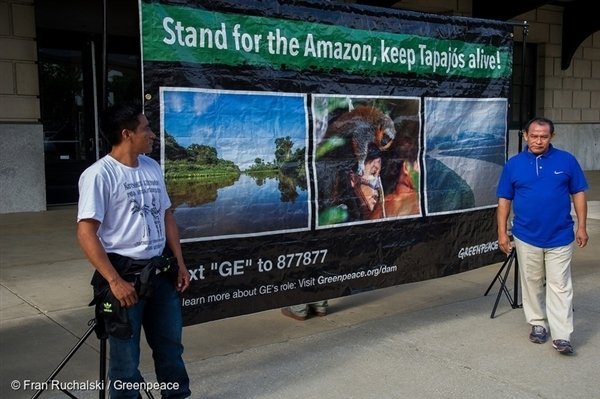 Today, Munduruku Indigenous representatives and activists traveled thousands of kilometres from the heart of the Brazilian Amazon to the annual shareholder’s meeting of General Electric (GE) in the United States. Their goal: to confront the company on its involvement in destructive hydroelectric mega dams in the Amazon.

The Munduruku are fighting a massive hydroelectric project – the São Luiz do Tapajós mega dam – along the Tapajós River in the Amazon Rainforest that would displace entire villages and destroy livelihoods. As Munduruku leader Adalto Jair Munduruku explains, “We journeyed here to speak to the leadership of GE and meet those that would consider profiting off the displacement of thousands of people from our traditional lands against our will, destroying our natural environment. The traditional population uses very well this territory. When we are forced out of our land, we lose our traditional livelihoods.”

Munduruku leaders, together with their allies, are showing up to speak directly to corporate decision makers around the world – from Austrian engineering company Andritz, to Siemens in Germany, to GE today – because these corporations make massive hydropower projects possible. Some have even been involved in devastating mega dam projects before.

GE recently acquired the hydropower business of the French company Alstom who supplied equipment to the another massive Amazon dam project – called Belo Monte. Alstom, prior to being merged with GE, had reportedly been in discussions to supply the São Luiz do Tapajós dam.

Austrian company Andritz was also involved in the construction of the Belo Monte dam, as well as another massive dam called Ilisu in Turkey. Both projects destroyed biodiversity and the homes of thousands of people.

Siemens, too, has a history of involvement in such projects. The company also provided turbines and generators for the Belo Monte dam.

At GE’s meeting today, Antonia Melo – the leader of Xingu Vivo, a Brazilian organisation resisting Belo Monte – joined the Munduruku. Antonia has been displaced by Belo Monte, watched her river get destroyed and witnessed the environmental consequences of the project firsthand. As detailed in a recent Greenpeace Brazil report, the infamous Belo Monte dam displaced thousands like Antonia, and is even embroiled in a corruption scandal.

We must make sure none of these companies choose to be involved in the São Luiz do Tapajós dam.

Standing up against the São Luiz do Tapajós project

The Munduruku have been adamantly fighting against damming the Tapajós River for over a decade. They have called on Siemens not to destroy their home. They have stood in front of Andritz’s front door and demanded the company keep its hands off the Amazon.

Now they are here at GE’s annual meeting, and GE is at crossroads. The company needs to listen to the Munduruku leaders. GE is already the largest supplier of wind power in Brazil. It can stop contributing to destructive, wasteful mega dam projects and instead contribute to the growth of Brazil’s clean energy solutions.

This past week the São Luiz do Tapajós project was stalled when its environmental licensing process was suspended – but not definitively cancelled. Now is the right moment for GE and all corporations considering involvement to publicly declare that they will have no part in São Luiz do Tapajós.

Stand with the Munduruku and help keep the Tapajós alive.

Daniel Brindis is a senior forest campaigner at Greenpeace USA.