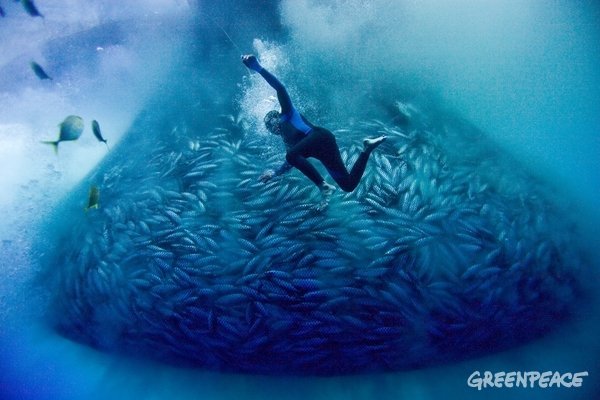 Every time you eat in a restaurant, hospital, airport, a university cafeteria, or at even at a rock concert, it is likely that you are eating food provided by a large foodservice company. Sea of Distress, a brand new Greenpeace US report, highlights which large food companies are failing to protect workers and our oceans.

But, what exactly is foodservice?

Foodservice is one of the largest industries we give our money to, but most of us know nothing about. These companies buy and sell tons of seafood, and some of it is destructively caught and potentially connected to forced labour.

In the US, roughly half of the money Americans spend on food outside the home is gobbled up by the foodservice industry. But if you don’t live in the US, why should you care?

Some large clients of US foodservice companies.

US foodservice companies like Sysco, Aramark, Delaware North, and Centerplate operate globally, with high profile clients such as the FIFA World Cup, Hilton Worldwide, London Heathrow Airport, Melbourne and Olympic Parks, and the Cologne Trade Fair. Some well-known US clients include Disney World, Walmart, BMW, Yosemite National Park, and Toyota. The US is a key market for UK-based Compass Group and French-based Sodexo, and as a major global player, what happens in the US industry matters.

Sea of Distress ranks the seafood sustainability of foodservice companies. Just three companies passed: Sodexo USA, Compass Group USA, and Aramark, while Sysco and US Foods are among the twelve failing companies.

Many companies are supplied by Thai Union Group — yep, there’s the largest canned tuna company in the world again. Thai Union is notorious for ocean destruction and some of its seafood supply chains have been connected to human rights abuses, where seafood workers were forced to work under horrendous conditions for months with no escape.

It’s easy to make informed choices at the supermarket, but when you’re eating in a cafeteria or at a football game you could be eating seafood connected to ocean destruction or even human rights abuses and you’d never know.

It’s time for companies profiting off of ocean destruction and mistreated workers to change.

Ready to help? Here’s how:

1. Know the facts. These are the companies in your country connected to US foodservice industry or parent companies of key US foodservice players. Here in New Zealand, customers of foodservice companies named in the report include: Wellington International Airport, Dunedin Hospital, and the Rugby World Cup, which are operated by Delaware North, Compass Group, and Sodexo, respectively. Sodexo USA and Compass Group USA led the rankings, but they still have massive room for improvement.

2. Eat tuna? Tell your foodservice provider that you want responsibly caught tuna, and express your concern if it is coming from suppliers like Thai Union that cannot guarantee sustainable and ethical products.

3. Take action. Ask how your foodservice provider is working to stop forced labour, labour abuse, and illegal fishing. If it’s a lousy response, take your business elsewhere. If you’re in the US, join Greenpeace Greenwire to connect with volunteers.

4. Eat less seafood. Reducing seafood consumption now can help lessen the pressure on our oceans, ensuring fish for the future.

5. Vote with your dollar. If you or someone you know eats seafood, only buy seafood you can be sure is sustainable and caught by companies that treat their workers ethically and fairly.

David Pinsky is a Senior Oceans Campaigner at Greenpeace USA.